Doxing Satan in the Purity Vanilla Discord, Ban was permanent but since has been lifted

W3Know first joined Purity Vanilla on the 18th of May 2019 under the username Tannerb133 which he later lost access to. W3Know began playing the server with a long time friend cat_muncher, they explored a large portion of the spawn before travelling hundreds of thousands of blocks by foot to create their first home of many to come.

He was also a merchant, trading elytras, god sets, totems and other valuables for real money. At one point he was known as one of the richest players on the server, but drifted into inactivity a few months into quarantine along with cat_muncher.

In July of 2019 W3Know thought it would be a good idea to break some of the portal blocks from an end portal located at X:1214 Y:16 Z:-1585 which was very commonly visited, he did this by using a exploit which is now patched that allowed you to place a bucket of water to instantly destroy a portal block , this led to staff discussing whether or not he should be punished with a ban because it was against the core rules of Purity Vanilla, W3Know was lucky and the staff decided to let him off with a warning because he was very close friends with nuns and chief both staff members at the time who defended him. Image bellow displays its current state, the portal wasn't repaired by staff. 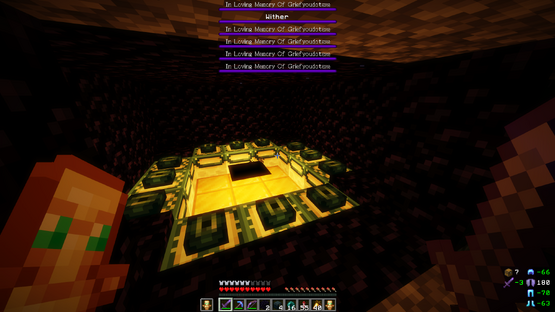