Spawn Infrastructure Project (SIP for short) was made by The Grey for server-wide cooperation in the spawn region. The project is now most famous for making obsidian highways after PaCo2 lost it's activity. Other then that, SIP builders aim to make spawn more convenient, help new players, and just have fun together around 0,0.

The project started on November the 8th 2020 but only grew significantly in December.

The War on Withers

Started on January 7th because someone kept flooding spawn with a very high amount of withers, hurting the roads and new players. SIP members made 4 events, where Americans and Europeans (2 different groups) gathered together and exterminated withers with smite swords. The only case when SIP builders were attacked was at the nether hub: Jamool, D1cka and Sooshon got ambushed by AxelHaze while fighting a wither.

Some people got into the spirit so much that they did a lot of solo work. Honzin, Knouhk and BlackCat112 (now perm banned) all got over 2 stacks nether stars.

The War was over on late January. Most of withers were killed, and penguin's new reduced withers per chunk limit was the last nail the coffin.

The Grey were working on nether highways for some time now, making them out of stone bricks with stairs railing. Highways werent given much attention at the time. One day Jamool joined PaCo2 server and was amazed with sheer size of it. He set a goal for himself to activate the sleeping beast and to bring people to the roads once again.

Not many people actually came from PaCo server, but one of the newcomers turned out to be the key. Player nicknamed D1cka_D1cka built a very complicated afk obsidian farm by himself, and with Jamool's help started generating large quantities of TNT-resistant block. That enabled the idea of OR.

Jamool started organizing the building process right after the launch of farm. Willing people were grouped into 4 teams each with it's own captain (responsible to give obsidian), all devided by time zones. Obsidian Roads stage 1 started on January the 16th, aiming to cover all highways to 10k with obsidian over 2 days. It was a huge success, the goal was reached in just 12 hours after the start. Video of the process: [1]

After this stage GamingPartridge (OwO) presented The Grey a map art for highway work.

Sometime between stage 1 and 2 MiningMaster, a member of PaCo2 and SIP, found a group of gunpowder farms owned by GriefyoudotEXE. Knowing that Grief had damaged highways in the past, he informed the SIP that he intended to destroy the farms, and a day later griefed them to prevent production of TNT, posting screenshots of the grief on the SIP server. GriefyoudotEXE afterwards threatened to destroy the nether highways with withers, blaming the SIP as a whole for the grief.

Under the impression that MiningMaster had carried out the grief in the Grey's name, and with him having violated the rule banning griefing, MiningMaster was kicked from the SIP.

At this point 120k+ of highways were covered with a road, most people grew tired of the job. The few who remained building were usually working double shifts around 22 hours combined per weekends.

The road was finished on February the 14th.

-Z was the biggest challenge of the OR. Old PaCo highway was done with cobblestone up to 25k (can not be instamined), old highway done by The Grey at y116 was made out of stone and project overall was very low on manpower. Jamool made a decision to start working in advance to have a chance to finish the project before the end of week, as planned.

Creative solution to the problem of old highway: [2]

Few people came to the axis and started spending hours on the road. Honzin was promised the highest SIP rank for 24-hour worth effort and actually did it over several days.

Last direction of Obsidian Roads was done at February 22 2021. 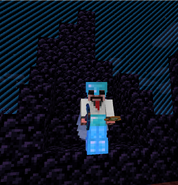 Most of the people burned out, but this has to be done anyway. Jamool used his ingots to buy packed ice (1 shulker ice = 1 ningot) and got around 50 shulkers purchased from other players. Mallty, Jamool, Norlak and Honzin also destroyed some icebergs to get more ice. In addition to that Sooshon, member of Invicta, gave SIP coordinates to station Zebra -- afk ice farm previosly used by PaCo. After getting enough ice placing began at March the 10th. RaghavMC, JetRon and moneyman782 covered around 10k with ice. Moneyman, VXNerveGas and Jamool later covered 2 highways to world border. Norlak covered one more almost entirely, and for the last highway Jamool got assistance from bluedragonfly1. 16 shulkers ice (including shulkers) were lost because Jamool gave them to a random new player who promised to help but stopped responding after getting shulkers.

Stage 6 was finished at March the 24th, exactly 2 weeks after start.

It started at the beginning of April 2021 with Honcho digging a tunnel until world worder in South-East direction. He posted screeshot of him finishing this work in purity's discord and was spotted by Norlak, who told Jamool about that. Jamool was inactive at that time so he didnt want to join himself but still proposed Honcho to supply him with enough obsidian, wood and wool to bedbomb a bigger tunnel and pave it with obsidian. Honcho agreed, and so the construction continued, now under SIP road standards and funding. Honcho was later joined by ReggieReckless, they worked together since. Their joined work ended at early May. At this point both got tired. Highway was finished until 20-30k with some separated patches done ahead.

Work started at August the 5th of 2021. BurningWolf was a person who introduced the idea to make this highway. Jamool was still inactive, but now felt that he might come back to playing actively with this gentle push. He gathered materials and started working with Wolf, they both motivating each other. At the early stages of highway RaghavMC and Mallty joined the effort.

Later MiningMaster was introduced back to SIP, mainly because Norlak took notice of how much effort he puts into highways and road monuments. That proved to be a huge help, MiningMaster invested a lot of time into North-Western road.

At 20k it was discovered that original tunnel on this direction was done by a person nicknamed Jkv002. He was contacted and later joined the team.

The last obsidian block at this road was placed exactly one month after beginning, at September the 5th 2021. Some time after North-West was finished a youtube video about Highway history was released: [3]

After completing all nether highways to world border SIP decided to add some vegetation to spawn. Trees were planted at March the 13th 2021. Participants: RaghavMC, JetRon75, Mallty, D1cka_D1cka, Honzin, Needle, purplecacti, BigMike, NoiZeX90. YouTuber Thesto took part and made a video about the event: [4]

Throughout the years a lot of people contributed to Overworld Highways, from solo work of new players placing cooblestone with iron tools to combined efforts of groups like OHC (Overworld Highway Corporation) or The Grey. Now the time has come for SIP to do it's part. Obsidian farm of The Grey continues to work, and shulkers upon shulkers of TNT-resistant block is making it's way to Purity's overworld dimention.

This time Jamool, D1cka and other Grey members did not place obsidian, being tired of Nether OR project, but new people took their place. Work started on March the 12th. First goal (all axis to 10k) was planned to be archieved before the end of the month. Active builders: M4ximusDMeridius (the best worker, Jamool-approved), Thesto, RaghavMC, JetRon, Erik081108, jeffersonabm.

The project was finished at March 31. 3 out of 4 axis were done with obby, but -Z had a canal at y63 so SIP decided to leave it as is.

Building shelters for new players is a part of SIP. Sometimes they are not maintained and therefore quickly griefed and abandoned, sometimes members of refuges make them their bases closed for newcomers. Refuges are made to be temporary living area for Purity's youngest players and therefore SIP administration doesnt really inforce any rules conserning them.

The base was built by CD and Honzin. Clucky Cat added, RaghavMC and Eclipce lived here.

The base is called "Greyce". It was built by CD and Honzin.