After not having played minecraft for 4 years, Rhonor decided to pick the game up again when his IRL friend, TescoBossman told him about a small vanilla server, Purity Vanilla. Rhonor first joined Purity on the 8th of July, and quickly got started.

The pair established a base, a large castle 20k away from spawn with the help of some IRL friends who shortly quit. The castle, due to its position, was shortly griefed. The pair's third base, Mosque 1, was built a lot further out and due to its complex design caught the eyes of Frazzle53, who then invited both Rhonor and Tesco to Build Guild, arguably the most prominent faction at the time.

After a few weeks, Rhonor returned again, to find that him and Tesco had been invited to Build Guild. Although stoked at first, after a couple weeks things became fucked up. Apparently Frazzle53, a member of the team, had joined Varden. BG members at the time all despised Varden due to them stating that they'd kill them all. Frazzle joining the very group that threatened to destroy BG was evidently a conflicting move. Although Rhonor thought Frazzle was just having bants at first, he realised he was actually being serious, and joined a new group formed up of previous BG members.

Rhonor, TescoBossman, ercercerc, Llamatata and Snakob had established a new group, intent on being completely separate to BG and ultimately better. Rhonor was still fairly inactive, and had attempted to make the lengthy journey twice, however was unsuccesful on both, dying twice, 1 due to TPS and the other eating KFC and not watching his screen, he ended up falling into lava. Being the lazy fuck that he is, he gave TescoBossman his login details and quit for a month.

After a dormant month of inactivity due to IRL stuff, he finally came back on. Upon returning, he built the Cathedral, a prominent build in the DB base, now called 'Rosengard'. After spending a continuous 4 days on the server spending at least 30 hours on his build, he didn't finish it and just set it aside being the lazy fuck he is. Rhonor continued to work on this build and the surrounding town along with Senddoes, however after getting bored they started building the second base, Los Dungeles.

In mid 2020, Rhonor was behind the formation of The Great Crusade and was tasked with getting Dumpster Dogs, Le Epic and Dung Beetles to form an alliance and erect a large wall around spawn. The wall was griefed a week after however the alliance is still in place, with Rhonor managing it.

Rhonor was appointed as the Raid Leader in the raid of the base The Empire. Although it was retaliation for attacking an allies base, he still regrets taking part in it and focuses on building as his top priority- there most likely won't be any more raids.

Los Dungeles was the second Dung Beetles base, the intentions of it being a sprawling fantasy city built upon a Mushroom island. Founded in August 2020 the base was well underway with cathedrals, towers and a port. Rhonor aspired for the central island city to resemble one of Game of Thrones and the Witcher 3 however his efforts were cut short when the struggles of building on an anarchy server made itself apparent. Invicta having stumbled upon the base purely by chance essentially ended with all building projects ongoing. The base was left for 2 weeks untouched whilst the members packed up and prepared to leave, with all farms being dismantled completely and abandoned. On the 7th November, the base was found by NSO and destroyed. 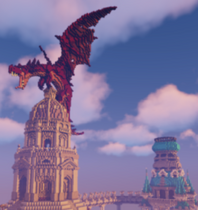 The Northern Sector of the island