A graph showing the coordinates of all End Portals can be found here. Thanks to Wefhy for creating this chart.

Below are several graphics made by NerdieBirdieYT. 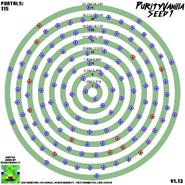 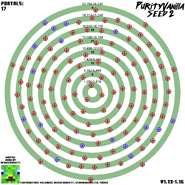 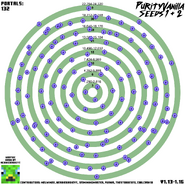 Inspired by the short list of End Portal coordinates by Melwin22 found on the Purity Tech Archive, NerdieBirdieYT decided to work towards publicly documenting coordinates of all strongholds across Purity's map. While certain programs such as Chunkbase allow users to easily identify the coordinates of all strongholds in a given seed, difficulty arose due to Purity's frequent version changes which affected the landscape and caused abnormal terrain generation, as well as the two seed changes implemented after seed crackers found the first and second seed. Stronghold generation would therefore not generate in a uniform pattern, as stronghold location would vary by what seed and version any given chunk was generated in.

Nerdie made two graphics - one for the first seed and one for the second - using a chart on the Minecraft wiki and overlaying Chunkbase stronghold results. When a Chunkbase result for either seed was ventured to in-game and confirmed to have an End Portal, a blue eye of ender would be overlayed on the graphic. A red eye of ender indicated that a location had been checked using all relevant versions according to the seed. While not perfectly accurate to actual coordinates, the graphics were designed to be used in conjunction with Melwin's ever-updating list, providing an aerial visual for which strongholds still needed visiting.

After desiging the graphics, on February 3, 2022, Nerdie would begin hunting for End Portals himself using Chunkbase and his graphics. He would find various portals marked with signs by RobertD related to a "Project Columbus," presumably Robert's own quest to find End Portals. These signs directly inspired the name of the Nerdie's hunt for the Tech Archive - Project Marco.

By February 20, Nerdie, along with a small group of people working on Project Marco (namely Thesto, Melwin, and CoolCash10), completed the map of all End Portals in Purity's first seed. On the first seed, 115 portals exist; the remaining 13 were not generated. By the time the first map was finished, Nerdie had personally documented a total of 56 Ender Portals, not including locations in which a portal did not exist.

On Februrary 28th, Project Marco was completed. It was discovered that 132 portals exist on Purity, 4 more than a regular world would have. Overall, Nerdie documented 64 portals, approximately half of all existing portals.

Behind the scenes, Nerdie and the participants of Project Marco secretly planned a sub-project called Project Marco: Polo. During Project Marco, all unopened portals had been documented. On March 15, a group of players including NerdieBirdieYT, Thestodabesto, Majorsopa, Fakeblockgame, Melwin, Swag, Coolcash10, MonsieurrrViking, Yurkis, Crsh0vryde, and 123MiningMaster, opened all 16 unopened portals consecutively, causing server-wide sounds with each opened portal. Afterwards, the group entered the End together, respawned the dragon, and killed it before being inevitably ambushed by JoeyC9. The group had planned on ambush, and the project was considered a massive success.