Nordica was a clan without a major sense of direction aside from simply existing. Conquering the End, the Nether, and setting up a domain in the Overworld were all planned, but would never be fully accomplished as the group would formally dissolve after the world seed leak and raid by TipTop.

Klaver_ and dasBBrot started playing in Purity Vanilla on the same day, June 18th, 2019. After dying multiple times, and Klaver unsuccessfully pairing with a player who he later learned was hacking, Klaver and dasBRot sought each other out and set out into the wilderness. The two had no interest in using the nether highway at the time, as they were unfamiliar with it and had no resources that would have made traversing the nether possible.

dasBBrot and Klaver had found themselves deep in the middle of a jungle. The two then started working on what would become Firebase Tarheel, a wooden/cobblestone shack comprised of a cow pen, skeleton horse stable, enchant room, and a sugarcane farm. It was a day after construction was completed that Kuro_exe had been invited and successfully found Klaver_ and dasBBrot. Three more players, being SlashedEye, Socital and rtzl, were also invited and made it to Firebase Tarheel. Socital and rtzl though, never returned to the server after they made the trek from spawn to Tarheel.

The absence of Socital and rtzl marked the end of the beginning for Nordica, as shortly after SlashedEye, rtzl, and Socital joined, the leadership of the clan sought out to switch bases and to leave Firebase Tarheel.

On June 23rd, 2019, Klaver's computer bricked after its hard drive broke. During this time period, dasBBrot and SlashedEye were banned after attempting to chunk dupe. Kuro_Exe had just gotten back on to the server after a ban for X-ray, making Kuro_exe the only active member of the clan. To make up for low manpower, Klaver retardedly invited a player named ella02xoxo (an alt of Snakob) to the clan, who was posing as a new player hoping to join up with one of the newly founded groups after "she" saw the Purity Wiki page. This was an autistic decision on Klaver's part. Despite all of the red flags imposed by ella's presence, he still invited her, which turned out to be an idiotic move.

Klaver, thinking nothing of it, ordered Kuro_exe to give her the coordinates to an unfinished base named Outpost Ass-Place in order to assist with the construction efforts. This base was intended to be a few thousand blocks out away from the group's first established base - Firebase Tarheel.

On June 29th, 2019, ella02xoxo went rogue and destroyed the uncompleted planned base, torching and blowing up countless books, tools, weapons, and armor. ella looted other caches of refined ores and blocks and stole many pieces of highly valued gear.

Despite this major setback, Nordica was determined to continue on. Fortunately for Nordica, since ella02xoxo never learned of the coordinates of Firebase Tarheel, Nordica was able to fall back to their original position, even though it may or may not have been compromised. Kuro_exe and Klaver resupplied on wood, stone, and ores while waiting for dasBBrot and SlashedEye to have their 7-day bans lifted.

Death in the Jungle

On July 3rd, 2019, Kuro and dasBBrot retreated to "Firebase Tarheel" to regear and regroup since staying in the wilderness would be dangerous, as ella02xoxo had leaked the unfinished base coordinates in public chat. Klaver and Kuro stayed at Tarheel for a good two days or so(since SlashedEye was still banned.) until a player named Tesco03PMealDeal jumped Klaver, who was alone in the nether grinding for experience at a blaze spawner. He killed Klaver and shortly after discovered the portal leading to Firebase Tarheel, the portal sitting wide in the open on top of a nether fortress. Tesco went through it and broke all of Nordica's beds. Klaver was now at spawn. Kuro_exe, waited for Tesco to grow bored and leave. After Tesco had left, Kuro regrouped with Klaver, collected as many valuables as possible and set out to build a new base.

On a date long forgotten by Nordica's leaders, Kuro_exe, dasBBrot, and Klaver set out to create a new base known as "PP-Base" an underground facility with farm and storage, thousands of blocks away from Tarheel, that Kuro and dasBB had founded. PP base would act as the groups' main base for a week or so before the group would go out and found the City of Ferguson. As of 4/12/20, PP base is now under the jurisdiction of the Dung Beetles.

The Story of Ferguson

At around mid-July of 2019, Klaver, Kuro, and dasBBrot set out into the nether to find a prime location for a new main base - making sure to keep in mind their last mistake: Staying too close to the z-axis. After an hour or two of mining, the trio set up a new nether portal frame and found themselves in a seemingly dull birch forest. Determined to find themselves an epic landmass of sorts, Kuro_exe and Klaver continued to go on for a few thousand blocks or so, while dasBBrot went offline. After another hour of walking, Kuro and Klaver found a gigantic plateau and decided to make their new main base here. It was at this point that Kuro went offline, with Klaver and SlashedEye ending up scouting the area and determining what parts of the plateau were suitable for base building. Klaver would for the next few weeks spearhead the construction of the base, dubbed "the Precinct", with Kuro, Cosmic, dasBBrot, Scare_Squad, and johnnymcmike also contributing in the building efforts through the gathering of supplies and refinement of the build. Before its destruction, the Precinct housed living quarters for all their members, a garden/forest, a temple at the very top of the mountain it was housed on, and a balcony that looked out at the savannah hundreds of blocks below. The Precinct took on the style of Minecraft's strongholds, with most of the base being constructed entirely out of stone bricks and their variants, along with other "earthy" type blocks.

In early August of 2019, Nordica agreed to team with The Nilbog, a clan of vegetarians, opening relations at first with a non-aggression pact, but eventually considered each other partners, creating a new coalition between the two groups known as Nildica.

The Infiltration of Nilbog and Nordica

After a few big players had enough of dealing with Kuro_exe's behavior in the discord chat, TipTopBop, Snakob, Daddy Satan and Tesc03Pmealdeal decided to gang together to find and grief the base. It started with Snakob's infiltration of Nilbog and Nordica under the alias b1suit, which was actually ella2020xo renamed. Snakob gained the coordinates to Nilbog which was then griefed by TipTop, Satan, and Tesc03P. During the infiltration of the Nilbog, Snakob gained coordinates of the Nordica private highway and Klaver_'s "overworld inside the nether". TipTop and Satan set out to the coordinates to hunt for the base. After following trails of players and searching both the nether and the overworld for hours on end, TipTop finally found a portal inside a birch forest as it said on their wiki. Searching around using the seed which TipTop still secretly had at the time he found the exact landmass described on their wiki and shown in screenshots they had posted. TipTop flew to the location and discovered the base.

The grief was in the following hours of TipTop finding the base for the first time. After taking a world download and taking anything of value (one sword with sharpness V and nothing else) TipTop, Snakob, Daddy Satan, and Tesc03Pmealdeal all gathered 1k away from the base to craft TNT, gather lavacasting supplies, and sort out other items. In the following hours, the base was blown up, lavacasted, withered, and destroyed. By the time the grief was done the base was unrecognizable and was a crater with a lavacast over it. Many other players were impressed by the sheer destruction and the fact that you couldn't even recognize the base whatsoever, unlike most other griefs on the server. During the grief, TipTop bedtrapped every bed he could find before anything was blown up. During the grief, Kuro_exe logged on and was instantly pursued until he logged off.

After the fall of Nordica, Kuro was freed by Mortem. Klaver, Kuro, KeirIsEpic, and Mortem went on to create The Entente. Kuro remained bedtrapped until Splash was going to quit the server, and freed him as a joke.

Klaver_, Keir, and Senddoes went on to start the Entente themselves after the initial collapse and were working on expanding their new base and creating a self-reliant environment for themselves to limit possible hostile contact with other players. Eventually, Keir, Klaver, and Senddoes would go on to assimilate into the Dung Beatles instead 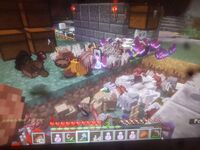 One of the chests broken by ella02xoxo.

The ruins of Firebase Tarheel 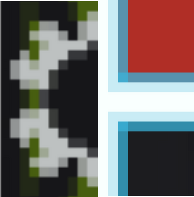 TipTop announcing to the chat that he found Nordica

Ruins of Ferguson from above

Entrance to the Precinct, Nordica's Base

Main Hallway of the Precinct.

Outer Entrance of the Precinct. Nordicans would fly to the top here, or use a waterfall coming from the side of a cliff.