The Dung Beetles was founded by ercercerc on the 12th of September 2019. The Dung Beetles consider themselves to be primarily builders but also dabble in PVP and trading between other factions. They are known for their elaborate builds ranging from imperial cities to large castles.

Here is a link to the public Dung Beetles discord: https://discord.gg/3wAgKyX

Soon after the founding, jama2ta joined ercercerc at their base, Dungmark, after leaving the Build Guild. A short while later, Snakob, TescoBossman as well as Rhonor, left Build Guild's second base, N3E3 and decided to join Dung Beetles instead of heading to Build Guild's planned next base. Around the same time, Sazoil rose from the dead to join in the construction of the base. The offshoot of Nordica, The Entente, would later arrive, along with b1tlet and TheDanishDreams. Xwey, and ___oVe___, arrived at Dungmark on the 23rd, and the 25th of January 2020, respectively. Since then, Flash, G0tem (EzObi), Raspberry_, Frazzle53 and Kelby003 have joined the group.

Construction of the Dung Beetles main base, Dungmark, began the same date as the group was founded. There have never been any images shown of the base due to ercercerc wanting the base's whereabouts to remain unknown. The base contains a large gold farm, a guardian farm, a raid farm, a trading hall, and large auto-crop farms alongside a variety of others. The beetles started working on a new quadrant of Dungmark, the cathedral town. The cathedral town is planned to contain a medieval village featuring a lighthouse and a cathedral. Rhonor and Senddoes, are the ones primarily responsible for the construction of the project. ercercerc returned to build a hut on new land, and TheDanishDreams has finished work on his houses and the port and is now working on Chateau de Bousiers.

Recent group projects include Chateau de Bousiers, Dung Beetles Castle and Rhonor's Imperial city, featuring cathedrals and DB's museum. After a 4 month period of inactivity from the server, Klaver_ has begun working on smaller projects around Dungmark, the most notable being the groups' regional cartographer. The Dung Beetles has also made a collection of maparts at the base, with jama2ta, b1tlet ,and ercercerc all having made unique and special maparts in the outskirts of Dungmark, coining the area for their mapart "fortnite valley".

Mapart is an important part of Purity Vanilla's culture, it's a way to bring your favorite images and memes into the game in any shape or size and Dung Beetles have created many of the servers maparts. Some mapart milestones DB have reached include: ercercerc making the first 2x2 mapart on the server, which was also staircased, and Sazoils shortly after creating a 2x2 on his own. Later on __oVe__  created a multi-map mapart himself that was 3x2.

If you want to keep yourself updated on the servers maparts, join the mapart Discord: https://discord.gg/UY9Cp76

Throughout the history of the group, db has always always been actively trading. Snakobs Book Store was one of the biggest shops of late 2019 and early 2020 prior to the 1.15 update, and the go to place for any books you need for gear, however this shop was closed following the reworks to villagers in 1.15. During early 2020, Dung Beetles had 4 active shops in the purity trading discords.

Snakob's Gunpowder Shop sells gunpowder and rockets in exchange for obsidian, so you can easily use your elytra, or make TNT.

Sinthers Sticky Stuff is the best redstone shop on the market, selling any redstone items, including slime and logs!

You can find these shops in these discords: Purity Trading Hub & Purity Market

Funkorogashi, Japanese for Dung Beetles, is a project mainly by TheDanishDreams and Xwey, and is a stylish looking farming base, fit with many farm, such as gunpowder, iron, villagers and a gold farm. It is all in one central area, to make in very easily AFKable. This base was abandoned and made public following the seed change.

Los Dungeles was a side base with construction started in August 2020. Named Los Dungeles due to the recurring theme the base was located on a large mushroom island surrounded by endless ocean, with planned intentions of creating a sprawling fantasy city and a wide variety of unique structures. For a seemingly long period of peace on the server, the group worked away quietly on the side base, building and enjoying the journey. 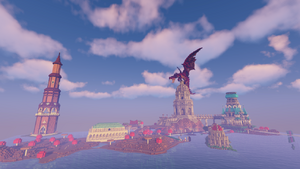 This era of amity was soon to be shattered however- on the 27th October, the base was discovered by allies at the time Invicta, a fellow long standing building group that happened to stumble upon the ice highways whilst searching for member's loot. By the time it was found, the base was well underway with Cathedrals, towers and a port town, however all ongoing progress was halted with the news of the location comprimise. Invicta having found the base acted with utmost formality and the two groups proceeded to create the Dungvicta article, a book stating that Invicta would not harm the base at all and that both sides would be neutral to eachother. Despite being satisfied with the peaceful outcome, the Dung Beetles reluctantly came to the conclusion that it was time to pack up and move as a preemptative countermeasure to future problems. Hundreds of shulkers were transported as they left the base, with all farms being dismantled to prevent abuse if there were, unlike Invicta, unwanted visitors.

Only a few weeks later was the second finding of the then abandoned base, this ocassion proving to be fatal for the remaining ghost base. Returning from a trip to the diagonal world border, Samonites, a member of the faction COA, stumbled upon the base whilst flying around. Evidently, despite sounding good in theory, basing in the proximity of a diagonal near world border led to the demise of the base.

Negotiations between Rhonor and Samonites ensued, with the conclusion of Samonites stating he had no interest in griefing the base and that he'd leave it alone after he'd gotten some loot to at least justifiably make it worthwhile. Despite Samonites sticking to his word, screenshots were leaked within COA resulting in the base being decimated shortly after by NSO. The raid of the abandoned Los Dungeles proved to be more detrimental to NSO than DB, directly causing the self grief of their base due to infighting.

The Dung Beetles, expecting an imminent grief of the base for weeks were predominantly unaffected by the loss of the already abandoned base and will continue to work on new projects, placing blocks in relative harmony.