Dovakaen, mostly referred to as Dova, has been playing since April 26th of 2019, a few weeks after the server has opened. On May 1st, Dova founded Phoenix Base, one of the largest bases this server had at the time. He became renown for being a (mostly) wholesome player that developed a good reputation among many of the soon to be staff, such as Nuns, Frost, Kova, and MastersChief.

"When I entered spawn, it wasnt as bad as it is today. There were a few lavacasts but nothing crazy. I think it only emcompassed a 200x200 area." -Dova.

Dova is a part of many groups with positive purposes such as Purity Trading and the MC:PV Coalition, a group formed to create a positive impact on the server- which very few players have been on. He often clears spawn and feeds new players, he also holds one of the most detailed head collections on the server, his collection includes Nuns, M1an, DouuG1, Frost, Lord Penguin, Kova, WATASHIRAMEN, Actzol, Popcat, GoldenCookie420, NJZJ, iCodeViper, operationclucker and several dragon heads.

He is very active on the server, often talking to anyone, even greys. He enjoys making large scale, artistic builds and adventuring with his trusty elytra and a hand full of rockets.

Dova's main goal in the game is to make the most ambitious builds, team with the most powerful players, and to find true love and companionship among his fellow minecraft players.

"Shieeeet, I also like to murk lil kiddies at spawn and place my MC bed next to Jocelyn's. Purity Vanilla is a place for ballerz, if u cant roll w the punches, get out." -Dova

When he first joined, Dova had his chat turned off and his first goal was to get out to 100k, which back then was a little more difficult as nearly none of the highways today were in existence. Founding a temp base on a mycelium island, he crafted many diamond picks with which he used to achieve his goal via the nether.

Dova has founded a total of nine bases on purity vanilla, including his temp base (956, 43, -21641), a base with WATASHIWARAMEN (1765, 65, -73418), Phoenix (4220, 64, -100044), and Phoenix Reborn (██████, ███, ██████). The fifth being a small outpost some distance from The Pillar of Autumn's original location- the sixth being Dova's sanctuary, which he built some time after leaving The Hive, the seventh being Dawnbreakers Solitude, and eigth Dawnbreakers Shivering Isles, and finally the ninth, a personal project, The Forbidden City.

He was not very active in the community until a few weeks after joining because he was focused on getting set up, but quickly he became allies with KovaMagniv, and _FrostBite6. Dova also partook in JPminer1206's live stream that made JP famous on Purity Vanilla. Dova was devastated when JP abandoned him to go set up a base with Penguin.

Ultimately Jpminer ended up being really annoying, so truthfully Dova dodged a bullet there- JP ended up leaking loliporn *WACK*.

Dova met WATASHIWARAMEN in real life, and the two have been close ever since. They ventured through many minecraft servers such as Vnlla.net. Since October 2018 they have always based together. With WATASHIWARAMEN's unique build style (mainly gardens, simple

modern architecture) and Dova's grand schemes for large artistic/functional builds, the two have created many impressive pieces across multiple servers.

After the fall of Phoenix, with the nuisance Finny beaned, Dova prepared to travel to Frost's 2B statue and gold farm. After a short time there, crafting a skybase, and relaxing got boring and Kova and Dova decided to travel to Erebus Core with MastersChief- leaving Frost the head of Phoenix. Soon after, Frost disbanded Phoenix and demolished his gold farm and statue to move in with Nuns at The Hive.

Shortly after arriving at Erebus Core, Dova started on a new huge build project, one to out do all others. Which he unfortunately abandoned. "Maybe one day I'll find where that lackluster pit was. I put at least a dozen hours into that thing, would be nice to come back and try again tbh." - Dova

"To all my base mates from the Original Phoenix Base, thank you. I never thought I'd find such awesome friends and enjoy so many hours of game-play, even if half the time it was silly PvP battles and swimming around in boats on land and in the nether. Once you're my friend, you're always my friend." ― Dovakaen

Dova embarked on an adventure from The Pillar of Autumn, as his project there was becoming tiresome. Some distance away he began small projects such as a pyramid of sea lanterns, a guardian farm, and a garden.

On August 25th 2019 Dovakaen embarked on a journey to The Hive to live among other mods, and to be in the oldest standing team in Purity Vanilla. Plus, Erebus Core was lowkey dying #sorrychief. Dova met up with Nuns, Zee, PunkFlorist, and Boone in the nether where they tunneled their way to The Hive base. Who knows if it actually exists...

Upon arriving, Dova was in awe. The Hive is one of the most magnificent bases he'd ever seen.

Soon after Dova's arrival, to his dismay, Nuns, Richeature, Frost, and M1an all left the server and staff team due to drama surrounding the ban of TipTopBopp and DaddySatan (a.k.a. SemiDepressed). Nuns being the sole founder and leader of The Hive, this left Boone at the helm. With many grieving for the loss of Nuns, the majority of the Hive disbanded. Many fell into the ranks of other groups on the server, such as Erebus Core.

One day, Dovakaen overheard the recruitment of a new team being formed. After the desolation of The Hive, as well as utter loneliness, Dova decided to hop in. As players flooded his discord over ten players embarked on a quest to begin this new team and start building. There were some technical difficulties though, as a few players died meeting up at spawn trying to escape to the nether.

Dawnbreakers was founded as a nomadic tribe of randoms joining to enjoy the server for as long, or as short as you'd like to stay. Dawnbreaker's main goal is to make the most ambitious builds on Purity Vanilla. Dova's heart is tired and weary, after the fall of Phoenix, Phoenix Reborn, Hive, losing Frost, Nuns, Kova, just about everyone he truly cared about on the server has left- he wanted to build a team that cannot die.

Joining the team- it's pretty simple. Go through an interview process, develop trust with the leaders of the group, and based on a team decision, at which point you will be entered or denied into the group. With its main goal set towards building, projects last as long as 2-3 months. Once a base/project is completed the base is abandoned and screenshots posted. We do not fear our last builds being griefed, just our future builds being compromised.

With its base constantly moving, this prevents it from ever truly being destroyed. While all the riches minecraft can provide are nice (eg totems, elytras, god gear, etc) the riches we require are simple- blocks. The nomadic aspect also prevents from a "dead team" when a base is evacuated all players are notified regardless of their activity. So, Dawnbreakers is almost always recruiting.

After some time with the team, Dawnbreakers fell twice to its own corrupt members, and some time later multiple members such as Popcat were banned. This truly decimated the team and today the team is widely inactive.

In mid February of 2020, Dovakaen joined his fellow staff member RasmusB into Invicta- again, with the main intentions to build with some of the best players on the server. As of March 9th Dova is working on a castle build similar to the one he abandoned at the original Phoenix Base as well as spending time on The Forbidden City build.

On August 22nd 2019 Dova became a trial moderator (eg mall cop) he was promoted on Spetember 2nd 2019. In his time as a moderator he has created the Purity Vanilla instagram @purityvanilla.mc and the Purity Vanilla Timeline in addition to running the Twitter. He has also amassed approx 30-50 bans on filthy hackers. 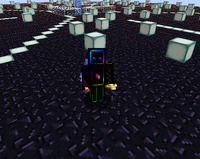 Dovakaen June 10th 2019 at the construction of Frost's Gold Farm, the greatest XP farm ever built on Purity Vanilla.